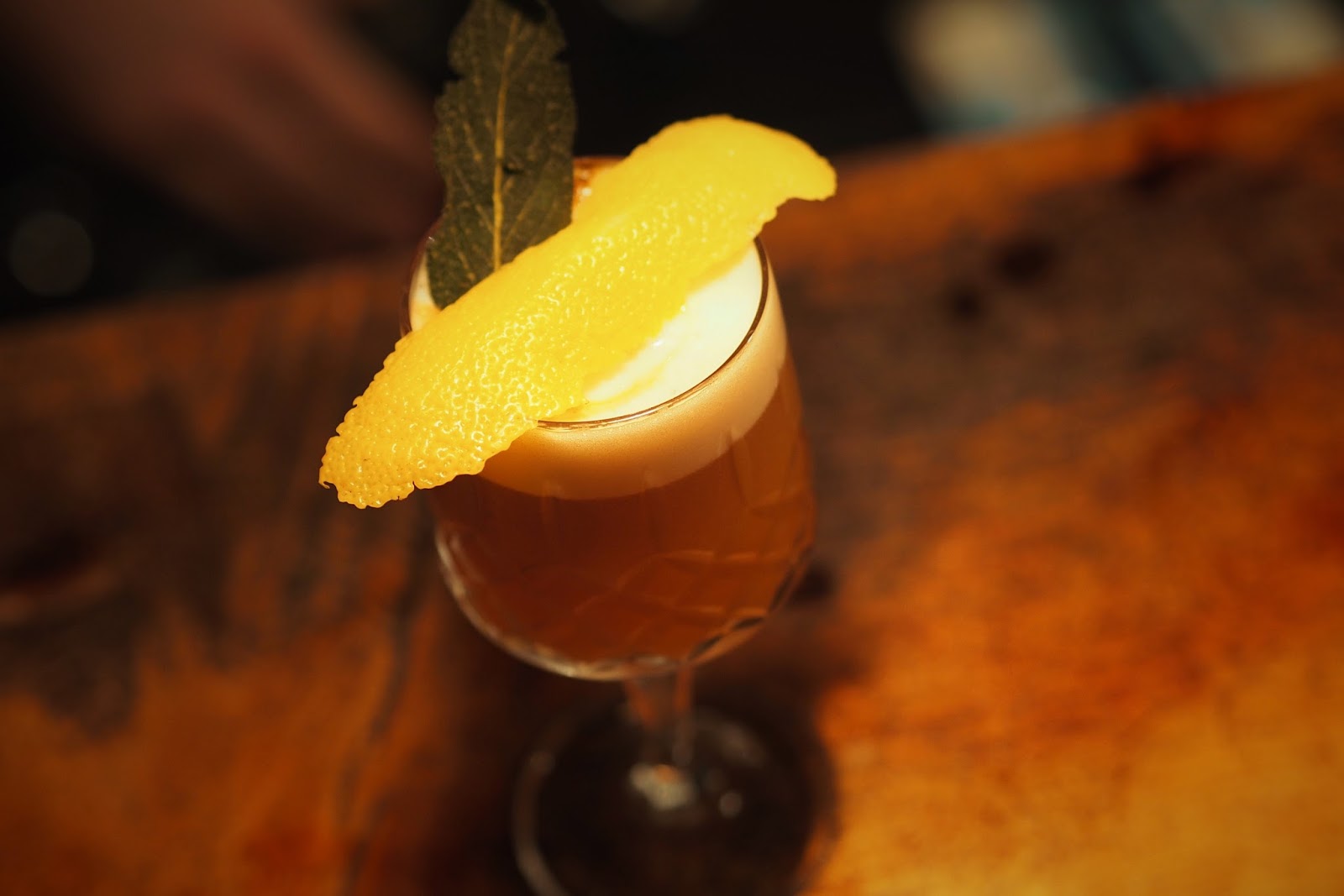 The leaves are slowly turning to orange and yellow, the days are getting crispier, the thick knit beanies are making appearances in the early mornings and I am (already) so excited for the festive days ahead! The last trimester of each year is my favourite, any excuse to sit by the fireplace, upon my return back home from work, with a drink in hand is just good enough for me!

The lead up to Christmas builds this excitement and evening habits more and more day by day, and if there is a chance I can master the art of cocktail making to impress the family during Christmas and NYE then I am up for it.

Last weekend, I spent a lot of time chatting to bartenders around Aberdeen(shire). Asking them questions about their signature cocktails, getting to know a bit more about their stories and decision to follow this creative pathway. It was the first weekend in months that I didn’t have to travel abroad, or go on a press trip (no early starts and itineraries to follow), and I enjoyed it thoroughly! On Friday I chatted to Ciaran from The Tippling House, then on Saturday I jumped on a train to Inverness and met Grant from Bar One, and last but not least on Sunday I met with Dominic at Social Bridge St. bar in Aberdeen. 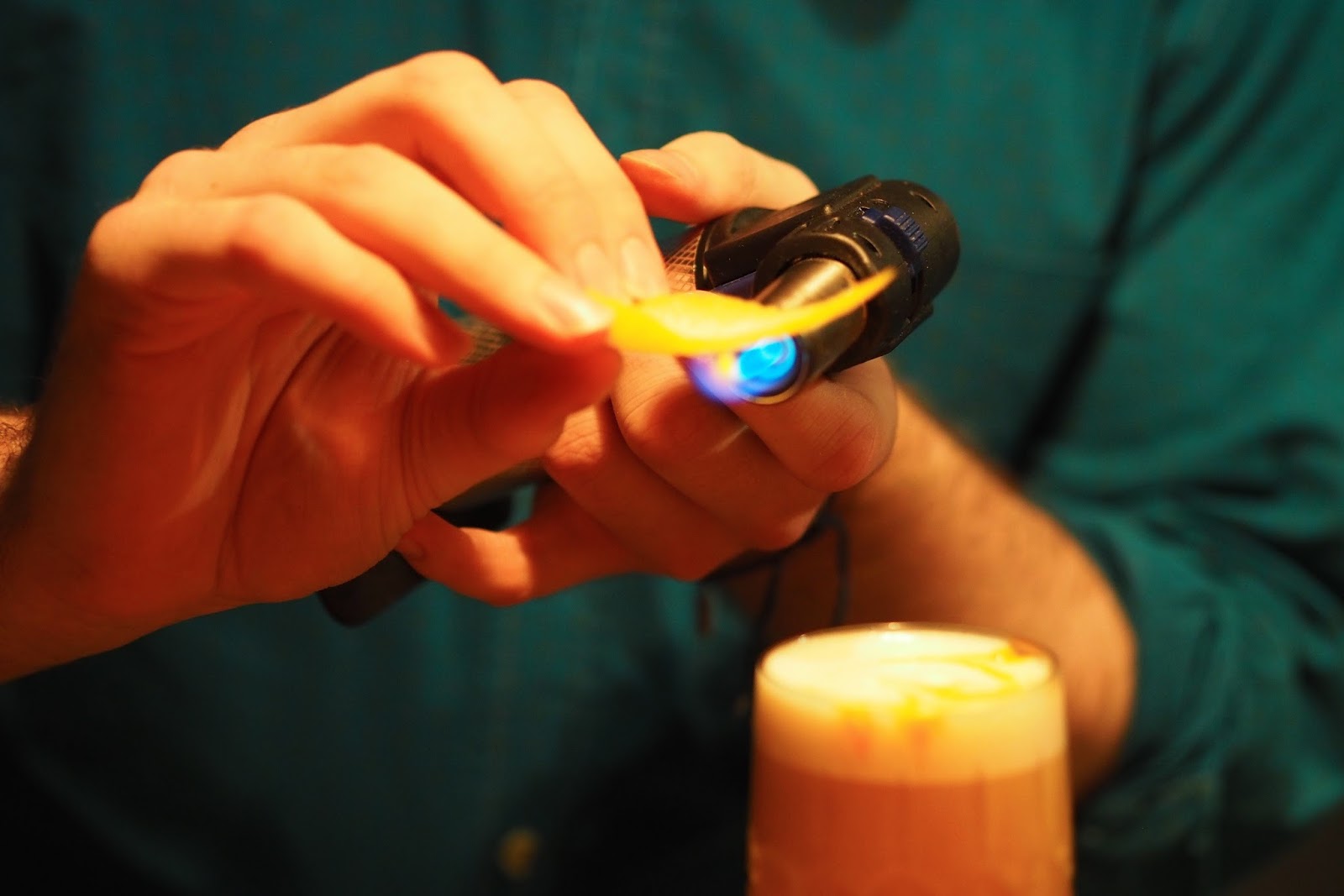 And in case you’ve been wondering what is the reason behind this new cocktail venture of mine, it’s #tncalling! Last month at the first ever Glasgow Sessions (an event created by the Jack Daniel’s Tennessee Whiskey to inspire the next generation of career bartenders through quality and creativity), bartenders from all over Scotland were invited to join an aspiration session of special guests talks. They shared their secrets and personal insights on the topic of all things Jack Daniels. Come the end of the talks, the Jack Daniels team invited bartenders to create cocktails inspired by the talks, and so the #tncalling competition was born!

After loads of consideration, 11 cocktails were chosen to go to the finals and I can proudly say that many of these cocktails were created by bartenders of the Aberdeen and Aberdeenshire area. And so I was asked to meet a few of the bartenders in their natural space, aka bars, taste their signature cocktails and find out more about each cocktail’s story and ingredients. 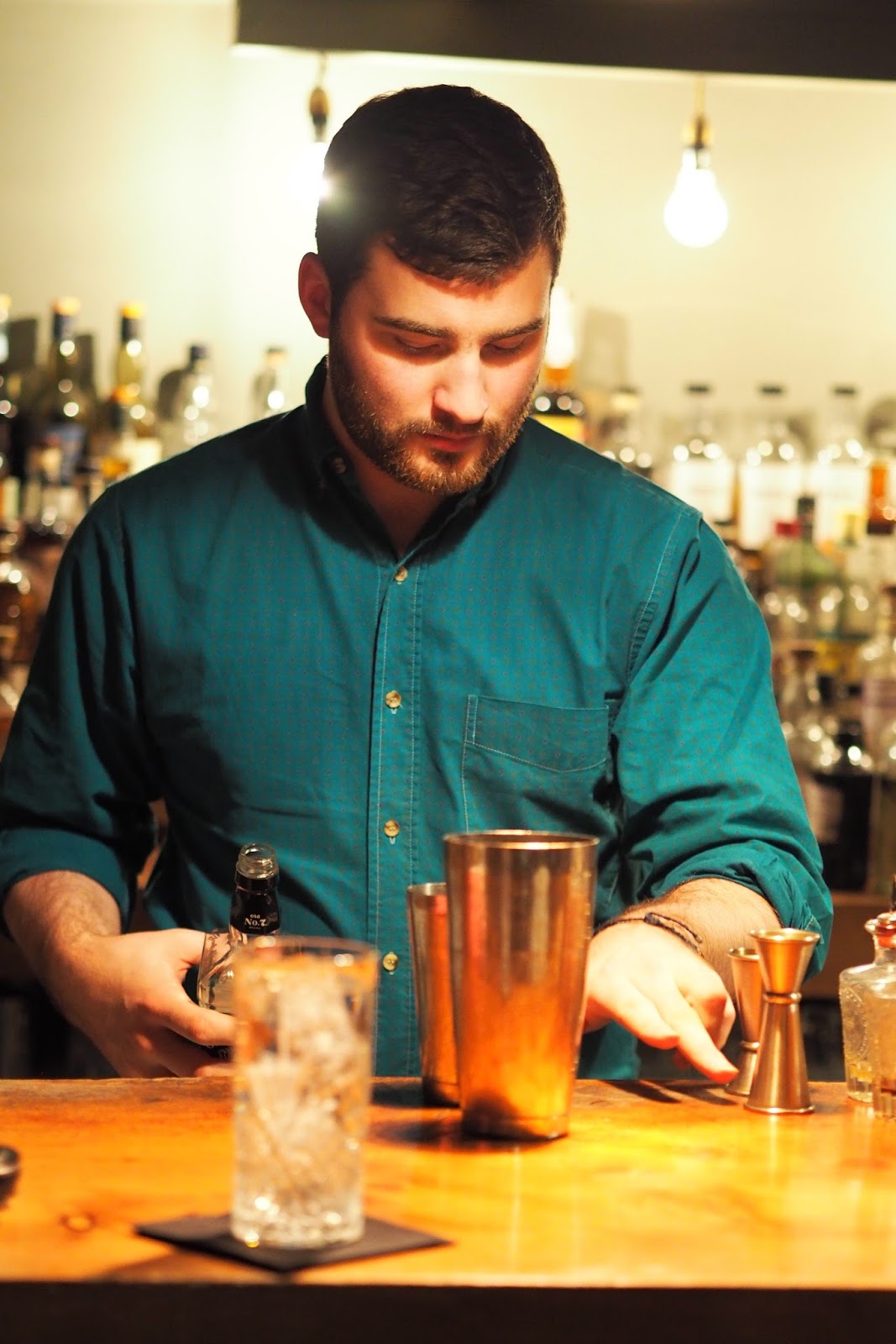 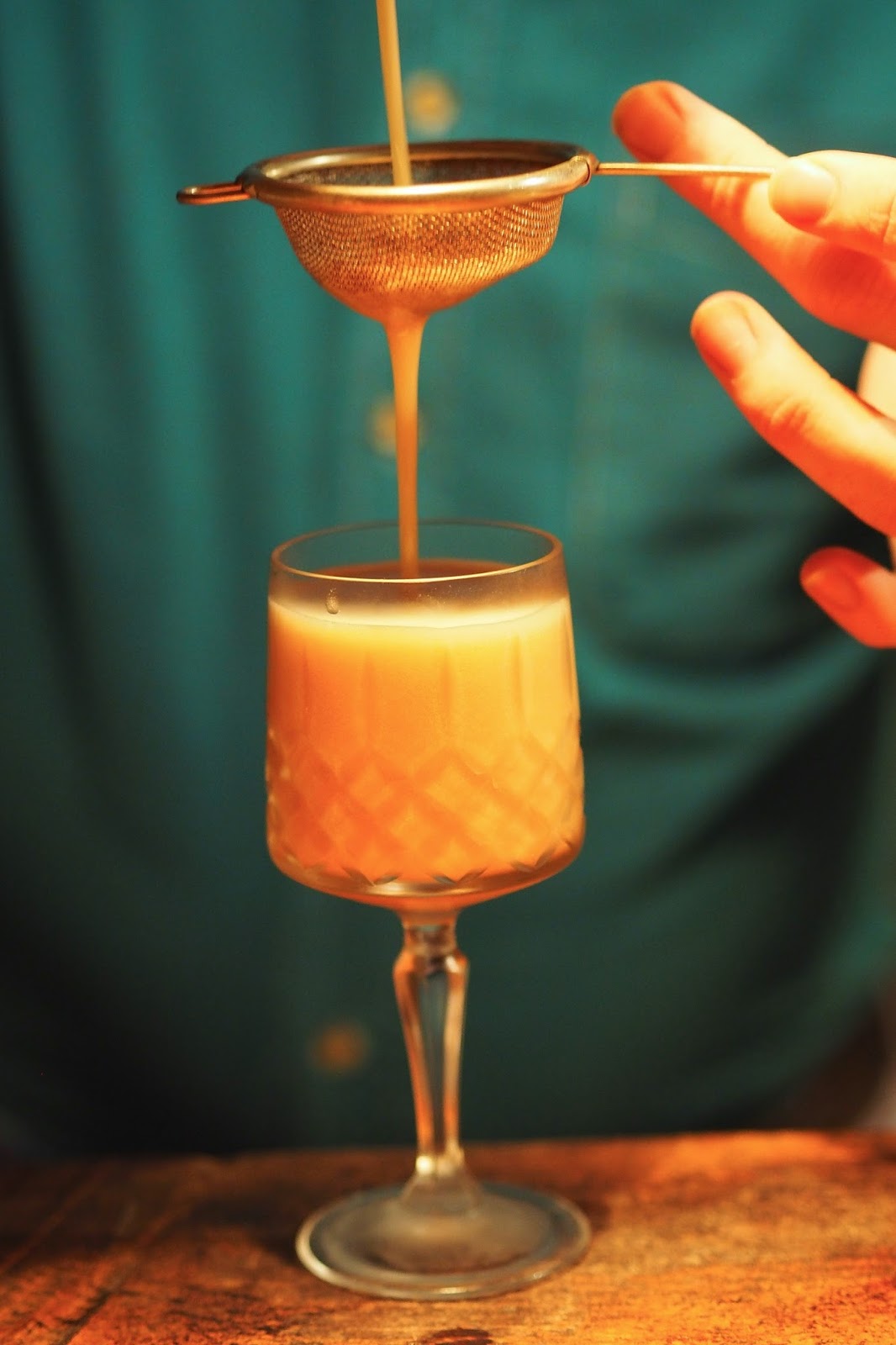 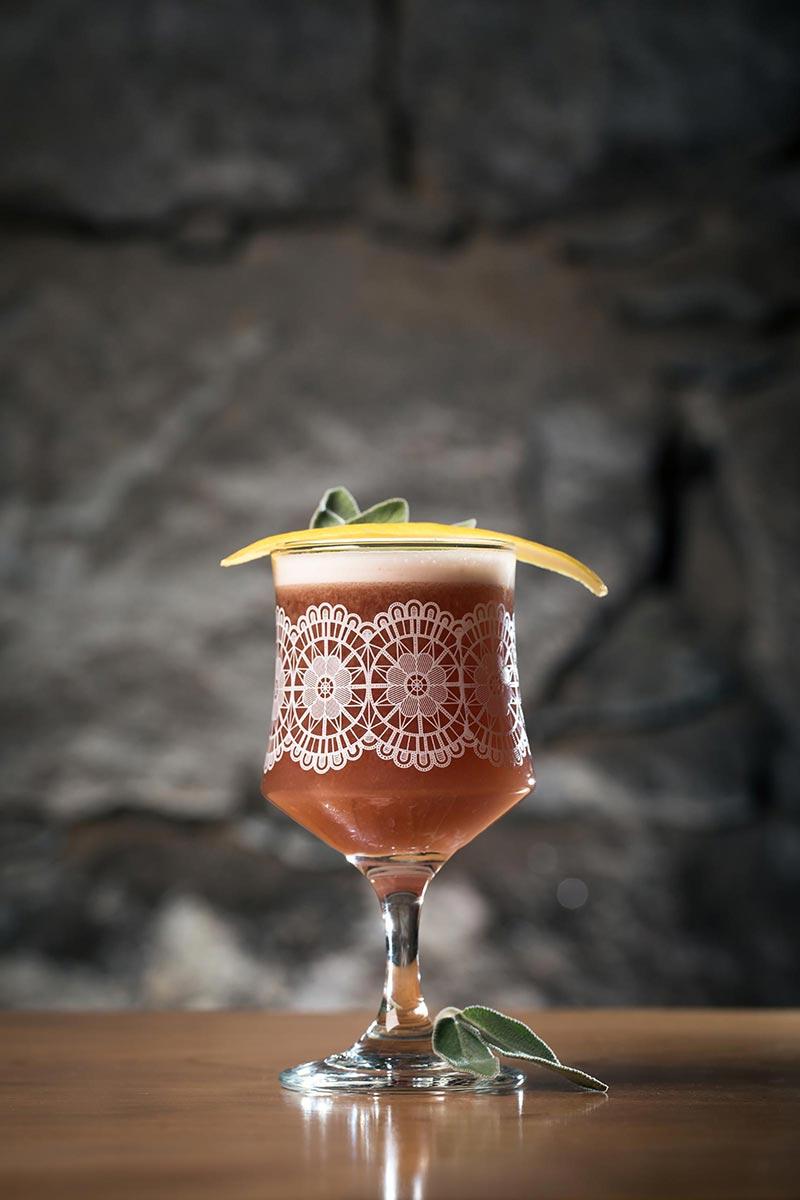 First to visit was Ciaran, a Biomedical Sciences student (so not your typical bartender) at The Tippling House. His winning cocktail was the “The Vine & The Fig Tree”, a cocktail inspired by George Washington who build America upon strong base with patience and knowledge, similar to Jack Daniel who made whiskey with an attitude focused on quality than quantity. Ciaran made his own fig and sage syrup, that brought loads of flavour and aroma to the cocktail. While preparing it he added Jack Daniel’s Old No. 7 Brand, Amaro Averna to balance the sweetness of the cocktail, a bit of lemon juice and an egg white. After dry shaking all the ingredients he added ice and served into chilled glass with a bit of orange peel aside. Even though I am not a fan of egg whites in cocktails, to my surprise I could barely taste it. The drink itself was tasty with a delicate aroma and subtle sweet taste. I could feel at the end of every sip a light fig taste but the Amaro and lemon stabilized all the hints. 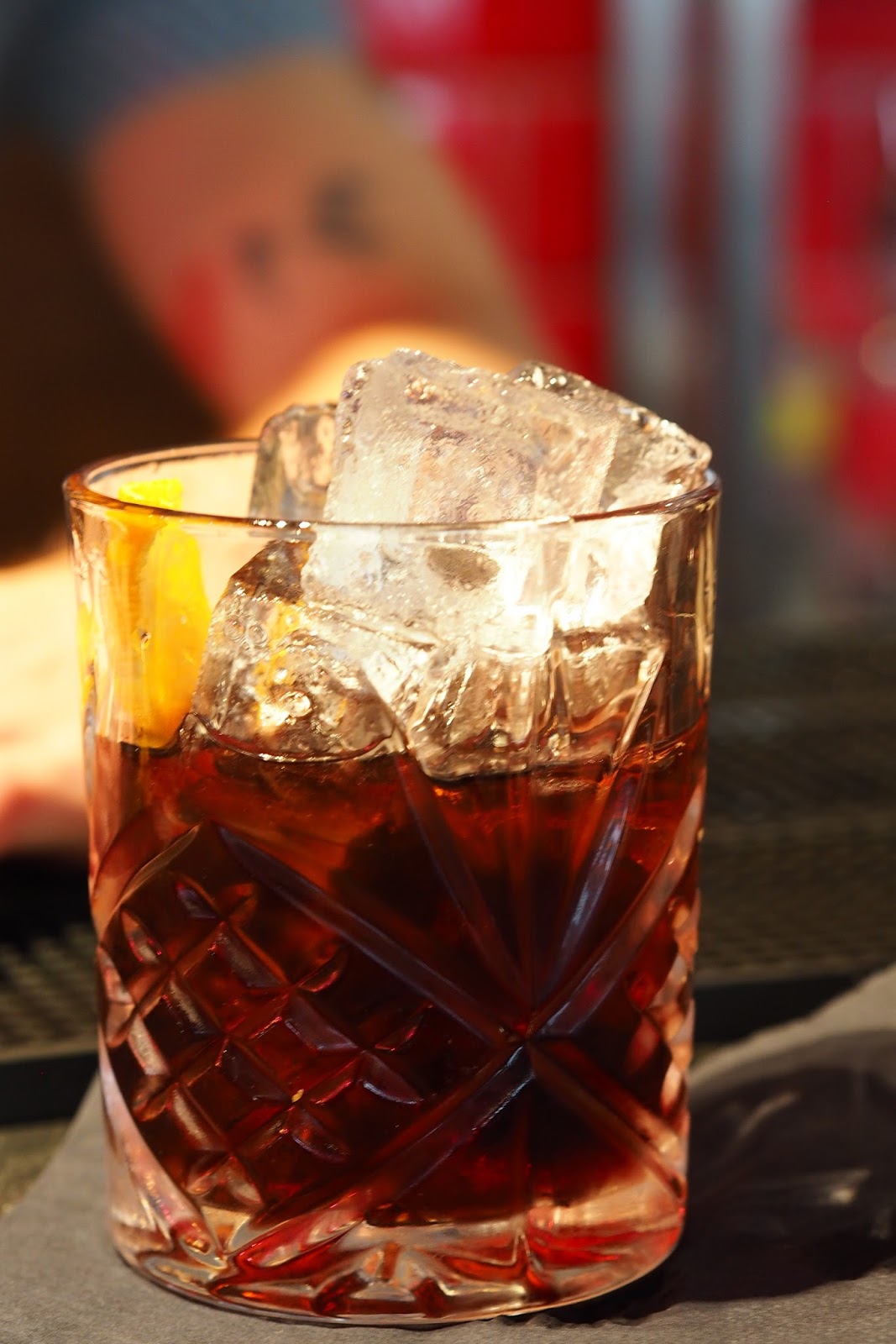 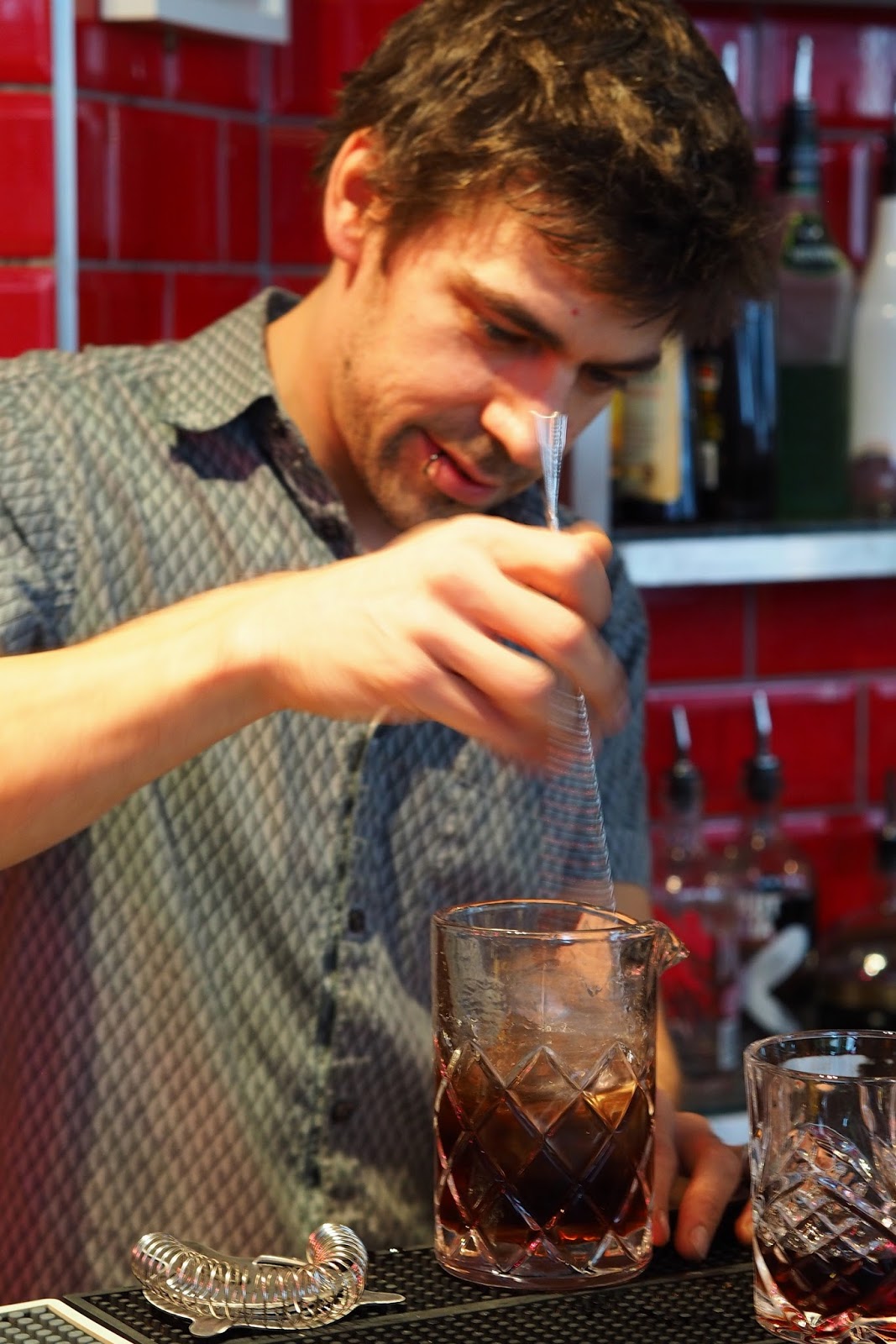 Next to meet was Grant from Bar One in Inverness! What I loved mostly in this cocktail experience, aside from cocktail drinking-duh!-was that I got to meet all these interesting men and listen to their stories. Grant’s story captivated me because in a way I saw myself into his lines. His winning cocktail was “The Usual”, served in old fashion glass he mixed Jack Daniel’s Old No. 7 Brand, orange peel infused Martini Riserva Speciale Ambrato and cherry balsamic and Cola reduction shrub (4:3 ratio). As he was preparing the cocktail, Grant told me that he went against his mum’s hopes and left Engineering at his final year of studies to follow his dream and become a bartender! It all started in Dundee during his studies when he was a regular customer (as every other University student) to a local bar, drinking his favourite cocktail that had flavours similar to the ones he used in The Usual! As he was talking to the barman he realised this is what he wanted to become one day. Through following this pathway, he became one of the top. By expressing this creative side of his and experimenting with flavours he won many competitions, got to do travelling and he is currently managing two businesses while also raising his young daughter with his wife. Certainly something to make his mum proud and not to regret leaving his studies!
Grant’s cocktail was really good and it was made up by familiar flavours. I tasted the combination of whiskey and cola when I was a teenager, it was the classic cocktail my dad would be drinking on a Saturday night while watching a movie. However, even though the cocktail had familiar flavours and it was visually easy to recreate, Grant took it a step further by creating two of the ingredients himself, which is exactly why this drink was so special! 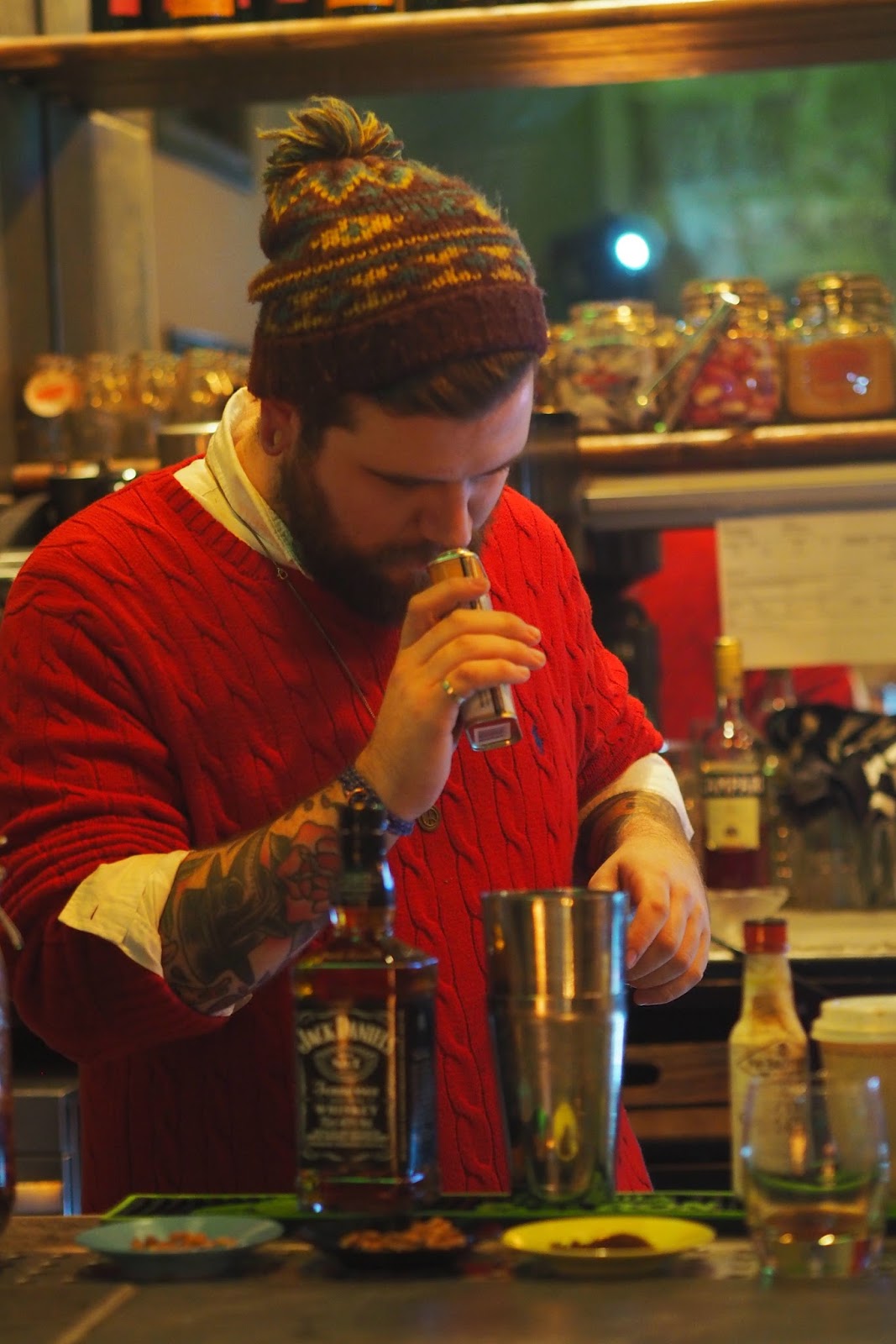 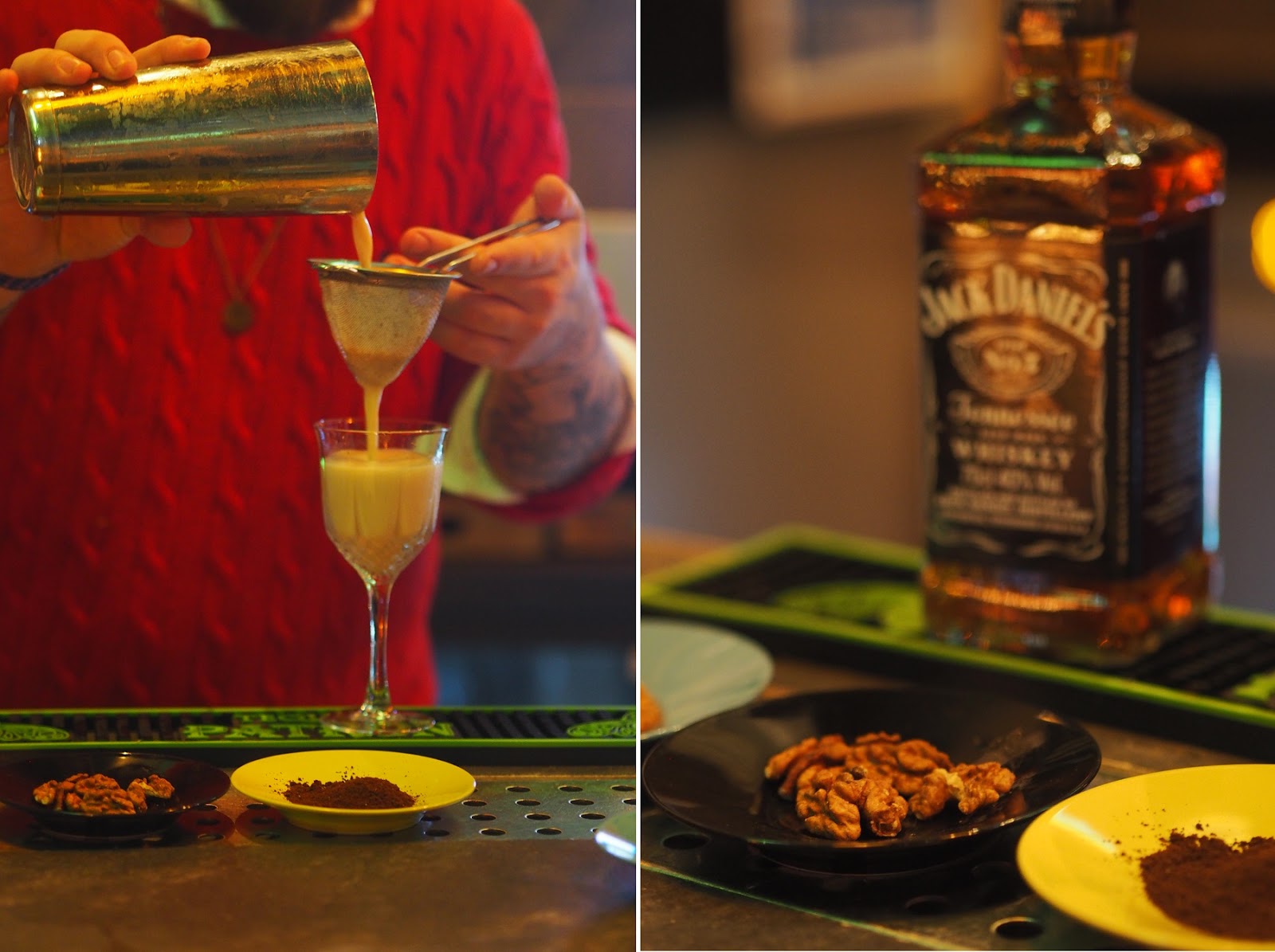 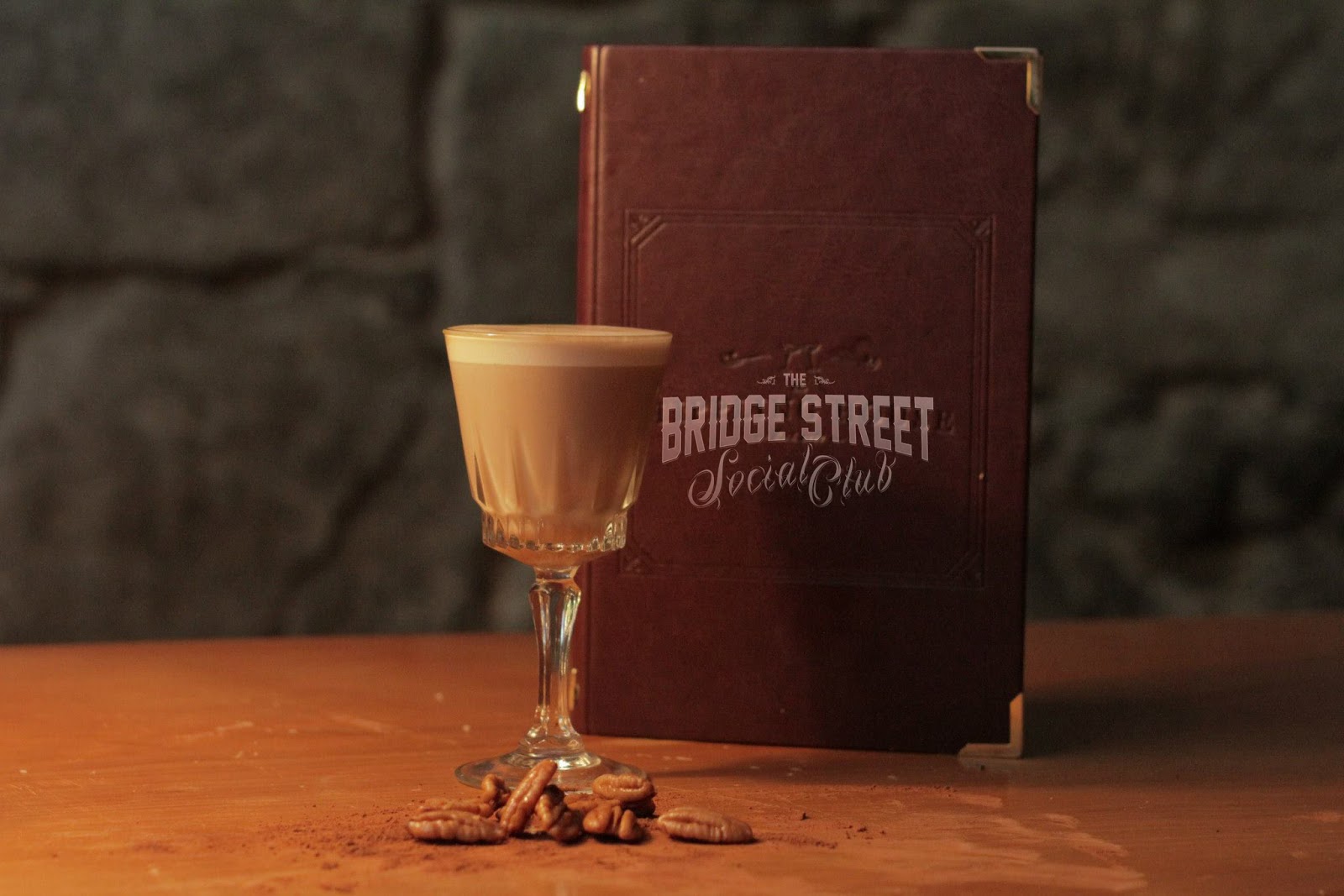 Lastly, I met with Dominic at the Bridge Street Social, a place I spent a few of my nights out with my best friend Eva when I first moved in Aberdeen! Dominic made “The Sunday Session“, a delightful cocktail made up by Jack Daniel’s Old No. 7 Brand, Cocchi de Torino infused with salted maple walnuts, vanilla infused Colombian coffee syrup, a dash of Bob’s chocolate bitters and one whole egg. Goodness, doesn’t this sound mouth watering? Dominic married all these different flavours after being inspired by his travels around the world; a bit of Italy, Colombia, Canada, England, America and the list is never ending…
The drink wasn’t as sweet as I would have expected considering the maple syrup, chocolate drops and the salted caramel walnut hints. By adding the egg in his recipe, Dominic managed to link all the ingredients in a thick textured cocktail, that was such a pleasure to taste! 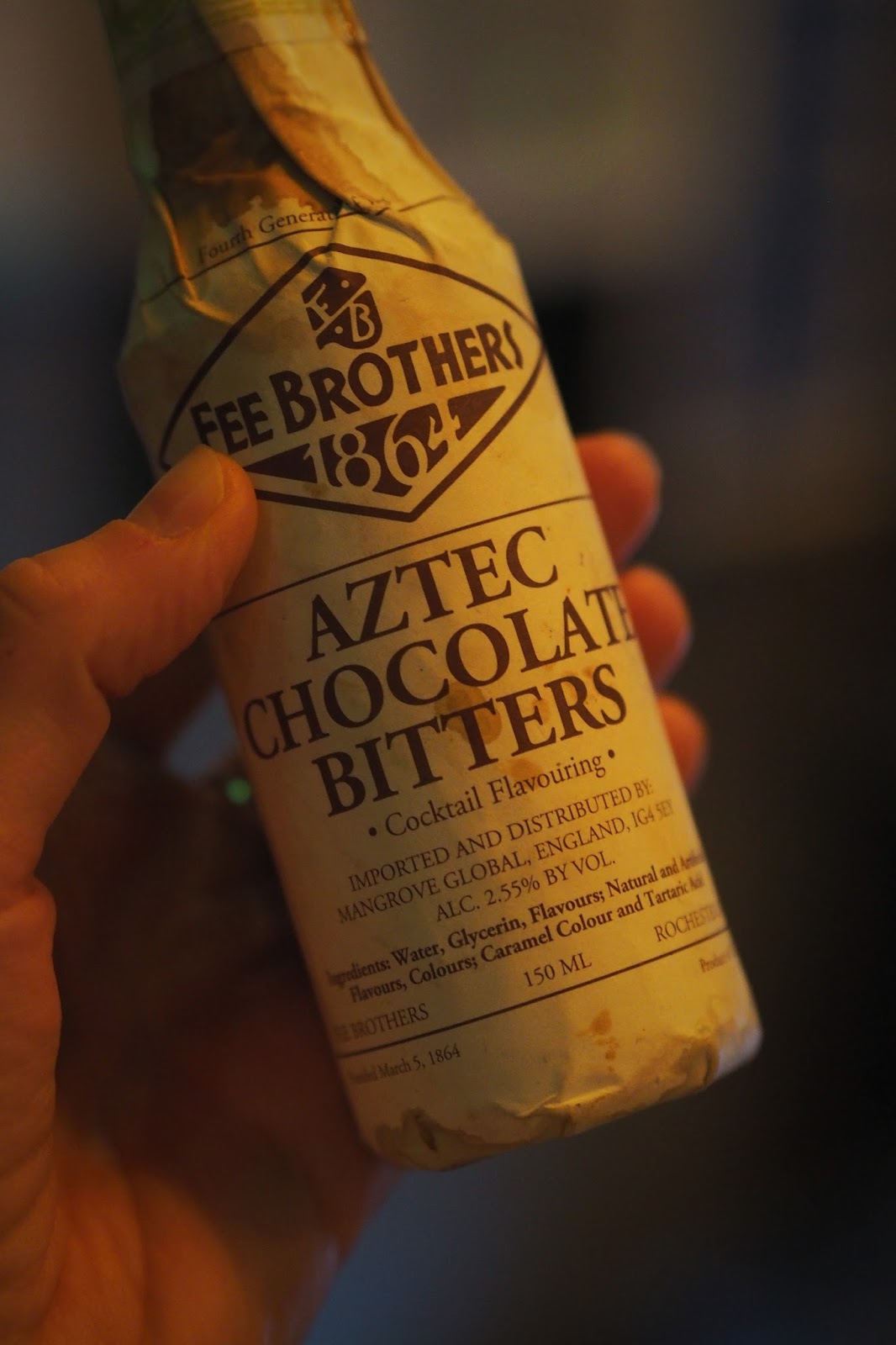 One thing I know for sure is that bartenders in Scotland know their drinks! All of the gentlemen I met were passionate about their job and cocktails. Each of them had an interesting story to share and an even more interesting cocktail to prepare. Jack Daniel’s Tennessee whiskey is an excellent choice for creating cocktails, however if it wasn’t for imagination and creativity, these cocktails would mean nothing. 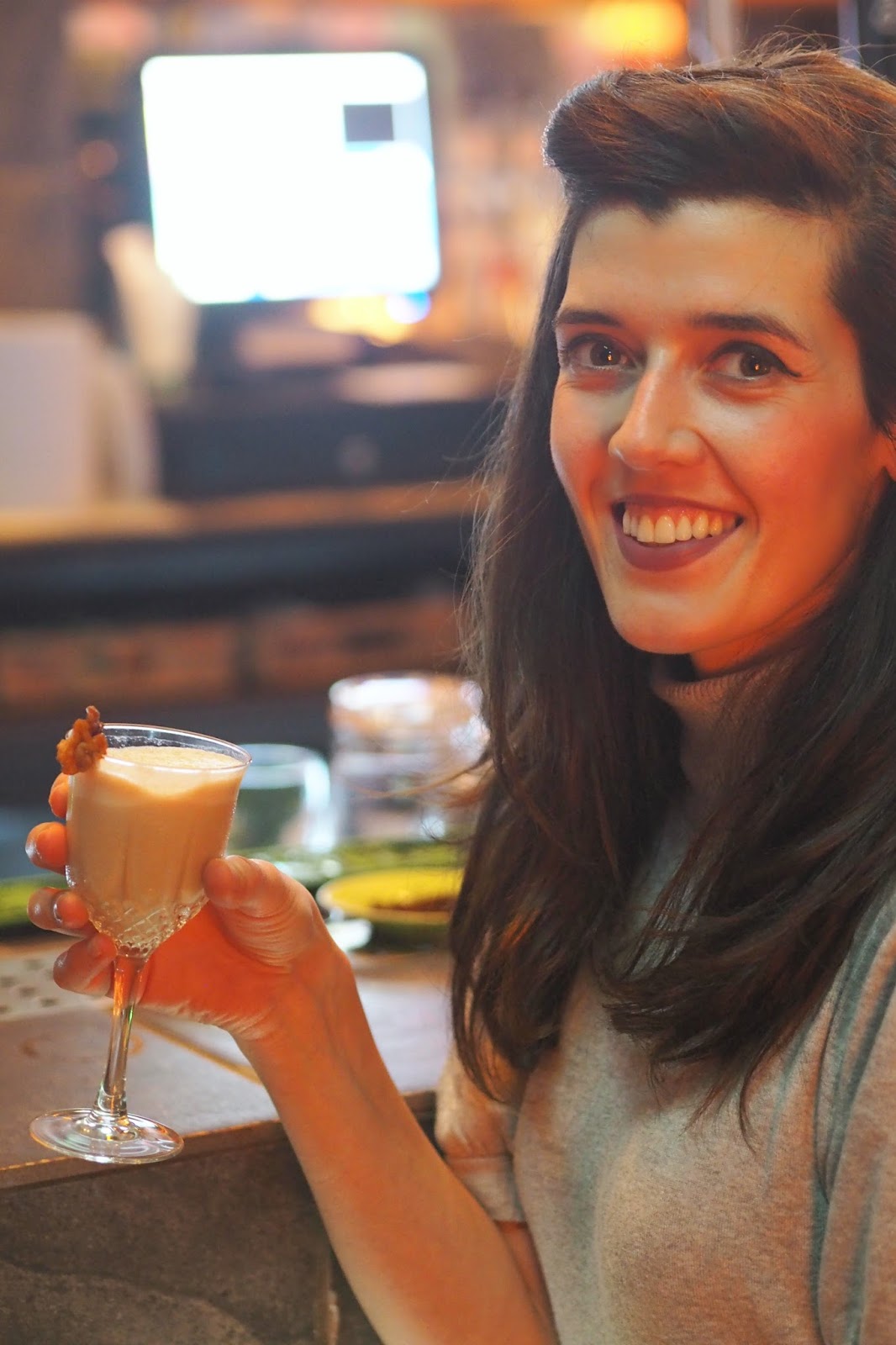 This new cocktail tasting venture opened my tasting horizons, made me think in a more creative way and definitely has me ready for cocktail making during Christmas! Already eyeing a few new recipes using Jack Daniel’s-what’s your favourite one?

Thank you Jack Daniel’s for this fabulous experience and good luck to all the contestants!
Anastasia x

What to wear in Venice :: The winter edition style edit

How to spend a day in Inverness!

Friday date night in the park

A Scottish Adventure with a BMW X5